Haumea (formerly (136108) 2003 EL61)  is probably one of the most interesting and intriguing Trans-Neptunian Objects. Haumea presents various atypical characteristics: it is large, bright, fast rotator, it has pure water ice on the surface, has a dark red spot on the surface, has a high density, has at least two satellites and there are more than ten Trans-Neptunian Objects with very similar orbital parameters and similar surface properties to Haumea. Haumea, its two moons and all bodies dynamically related with this object form a peculiar family in the Trans-Neptunian belt. From the short-term variability studies, one can appreciate that Haumea is the fastest rotator known to date, close to a spin barrier suggesting that this object may have suffered a rotational fission.

Recently, we have investigated the rotational properties of the family members and unconfirmed family candidates with short-term variability studies, and report the most complete review to date. The mean rotational periods, from Maxwellian fits to the frequency distributions, are 6.27±1.19 h for the confirmed family members, 6.44±1.16 h for the candidates, and 7.65±0.54 h for other TNOs (without relation to the family). According to our study, there is a suggestion that Haumea family members rotate faster than other TNOs, however, the sample of family member is still too limited for a secure conclusion. 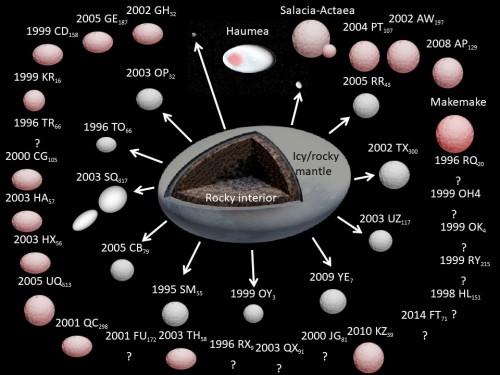 Figure 1: It is thought that the proto-Haumea (large object in the center of the figure) was a differentiated or partly-differentiated object with a rocky interior and an icy/rocky mantle. Most of the icy/rocky mantle has been removed and the fragments ejected created the Haumea family members (grey objects). The leftover of the proto-Haumea is the current Haumea. Several objects are classified as candidates to the family (red objects). They are not official members of the family because their composition is unknown or because they have no ice on their surface as the other members of the family. Shape of these objects is approximate and has been derived from their lightcurves. In some cases, objects have never been observed for lightcurves and so we do not have a good constrain about their shape. These objects are indicated with a question mark.

I also participated on the elaboration of a model able to explain the Haumea family genesis thanks to rotational fission triggered by a sub-catastrophic collision.

Figure 2: Different colors are used every time the object is spun-up. The initial target (in red) suffered several increases of angular momentum. The target
deformation is noted until its break up (in blue).

The main result of this simulation is the formation of a binary system and the confirmation that the rotational fission is feasible for this kind of object.

Now, we want to check if a low speed collision is able to provoke the rotational fission. We create a spherical projectile with a density around 1 g/cc. We perform a collision with a velocity of 1 km s−¹. The simulation is:

After the collision, one part of the projectile is encrusted on the target surface whereas the rest is ejected at high velocity. This feature may explain the dark spot reported on the current Haumea surface. We must point out that part of the target is also ejected during the collision. The quantity of target material ejected depends, basically, on the impact velocity. Due to its own rotation, the target becomes more and more deformed until it reaches a “skittle-form”, known as Poincaré figure. Finally, due to its own rotation, the “head and the body of the skittle” are separated. The “head” becomes a satellite of the largest remnant.